Throughout history, strawberries have been a popular and vibrant focus on various paintings – a perfect object for a still life! Here are a few examples by famous artists.

Katsushika Hokusai (1760–1849) was a Japanese artist, painter, and printmaker who was born in Edo, modern-day Tokyo. Hokusai began painting around the age of six, possibly learning from his father. Initially, in his teenage years, he worked as an apprentice to an engraver. But then, he entered the studio of Katsukawa Shunsho, a leading artist and printmaker. 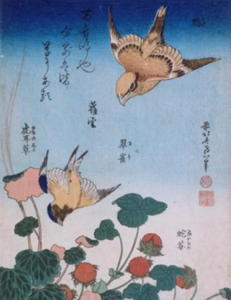 His famous painting containing strawberries is called Swallow and Begonia and Strawberry Pie, 1834. It can be viewed in the Guimet Museum in Paris, France.

Marc Chagall – Strawberries Bella and Ida at the Table, 1916

Marc Chagall (1887–1985) moved from Russia to Paris in 1910, where he was astounded by the recent creations of the various Avantgarde movements. His paintings have a very unique, contemporary style. This makes his painting of the strawberries even more exceptional, as one can hardly believe it is from his mind and hand. 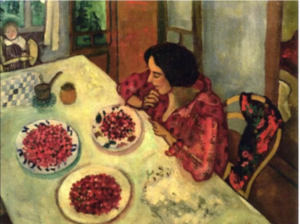 Marc Chagall, Strawberries Bella and Ida at the Table, 1916, part of a private collection in Paris.

Freud (1922–2011) painted this life-size strawberry still life at the height of his fascination with the Old Masters. Indeed, he was so passionate that the then-director of the National Gallery, Neil MacGregor, granted him 24/7 access so that he could enjoy the peace and quiet with his easel after midnight. 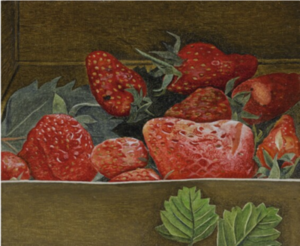 This work was painted as a gift to Ann Rothermere who was Freud’s patron and close friend. It can now be viewed as part of a private collection of Sotheby.

Zinaida Serebriakova (1884–1967) was one of the very first women artists with academic accomplishments in Russia. Her most famous work is the painting, At the dressing table (a self-portrait). 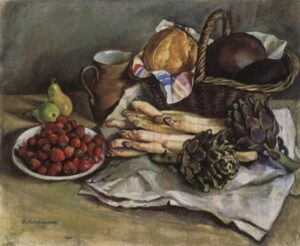 Still life with Asparagus and Strawberries can be viewed in the Taganrog Art Museum, Taganrog, Russia. 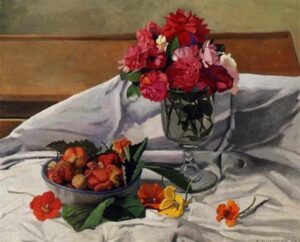 Flowers and Strawberries, 1920 is part of a private collection in Paris.

From the 1900s, Renoir lived in the Midi region in Southern France, in Cagnes-sur-Mer. He had a house built here in 1908. He was not in good health and for the most he was forced to be confined to a chair. This did not keep him from painting, even though he focused on small format canvases of still lifes. 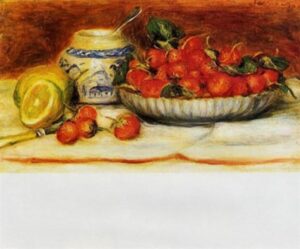 Ferdinand Georg Waldmüller (1793 – 1865) was an Austrian painter who represented the Biedermeier period, an artistic era in Central Europe, mostly Germany, that emphasized the growing middle class in Europe.

Still Life with Roses, Strawberries, and Bread was painted by Waldmüller in 1827, and is hosted in the Austrian Gallery Belvedere, Vienna, Austria.

During the summer of 1882, Manet (1832 – 1883) lived in Rueil, near Paris, in a house with a garden. The view this location offered, provided much inspiration for many paintings. However, by this time he was ill and old and only managed to paint mostly small-scale studies of objects. He passed away in April the next year. 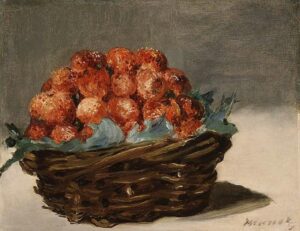 Strawberries, ca. 1882 by Manel can be viewed in The Metropolitan Museum of Art, New York, NY, USA.

Coorte (1665 – 1707) is known for the most beautiful renderings of fruit and vegetables in art history! You can recognize his still lifes through his distinctive style painted in miniature format, depicting delicious-looking food on a ledge against a dark and clear background. True poetry through art! 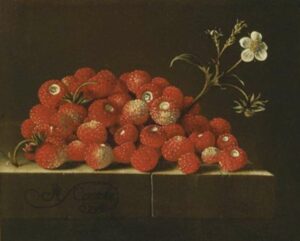 Still Life with Strawberries, 1705, by Coorte can be viewed in the Rijksmuseum, Amsterdam, Netherlands.

Louise Moillon (1610 – 1696) was a French still-life painter in the Baroque era in France. Her forte was the detailed and realistic representation of fruit. She painted this marvellous painting when she was only 20 years old! 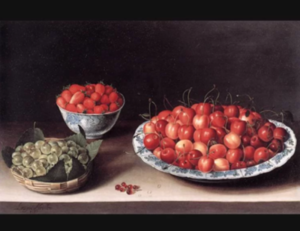